I have been yearning and dreaming about going to Greece and seeing the ancient ruins of the Acropolis and visiting the sunny Greek Islands in the Aegean Sea.   I’ve recently made those dreams come true.  During my visit to Greece I was able to visit Athens, Delphi, Meteora, Mycenae, Epidaurus, Mykonos and Santorini.  We were supposed to go to Crete as well, but we ended up cutting our trip short due to political and economical turmoil in Greece therefore we cancelled the Crete portion of our trip.  I will have to save Crete for another time.

Being in Athens was hot, hot, hot!!!  I was dripping with sweat daily and getting some color on my milky white skin.  I am not a fan of the sun so I was definitely uncomfortably icky, hot and sweaty.  Besides the heat, Athens itself was congested and dirtier than I expected.  I’ll be honest; I felt Athens lacked the European charm that most European cities I’ve visited emanate.  However, the archeological ruins were spectacular and breathtaking.  I loved seeing the different ruins and of course photographing them.  The Parthenon was beautiful even though it’s under construction for restoration.   The caryatids were gorgeous.  I was incredibly happy to finally be there standing next to the famous Parthenon!!!

We spent our first day exploring the Acropolis, the new Acropolis museum and then wandering the streets of Plaka.  Everyone says Plaka is touristy, but hey it was clean and it had the charm that I felt the rest of Athens lacked so I enjoyed walking around the Plaka area.  Now don’t get me wrong, I don’t mind dirt and grime, but for some reason I had in my head a cleaner and more charming expectation for Athens so when those expectations weren’t met I guess it stuck out in my mind.

Here are a few images from my first day in Athens.  Check back soon for more blog posts of Athens, Delphi, Meteora, Mycenae, Epidaurus, Mykonos and Santorini!!!  Thanks for stopping by!!!  Happy Aloha Friday!!!

Some scenes from Greek streets…and yes, there really is that much graffiti around the city… 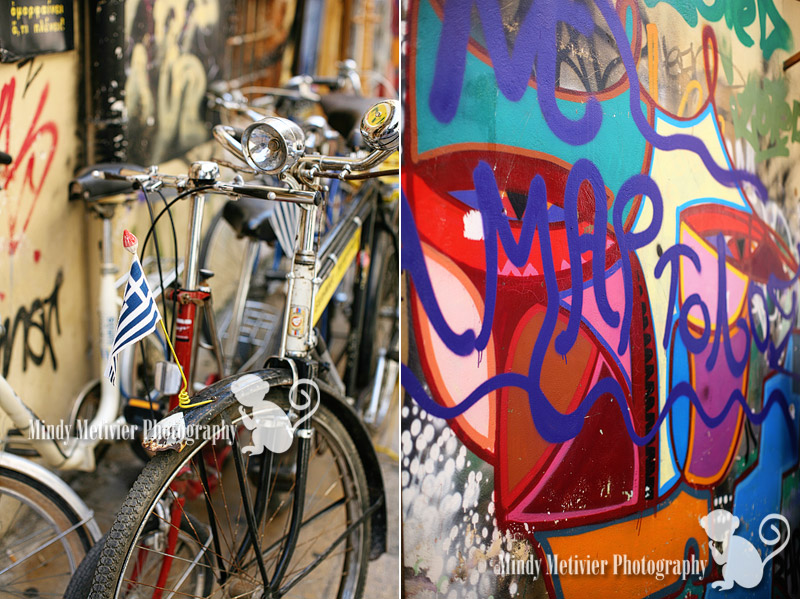 He was cute.  I am shy when it comes to taking images of people around the world, because I feel awkward asking them if I can take their photograph.  So in the beginning, I was trying to just capture the graffiti behind him, but he thought I was taking his photograph so he told me in Greek to wait (I think that’s what he said) and then he started playing his accordion and singing for me.  After taking a few images he then said something else in Greek, which I am assuming by his changed tone and gestures that it was now time to pay him.  I only had a 2 Euro coin so that’s what he got and I thanked him for singing for me and allowing me to photograph him. 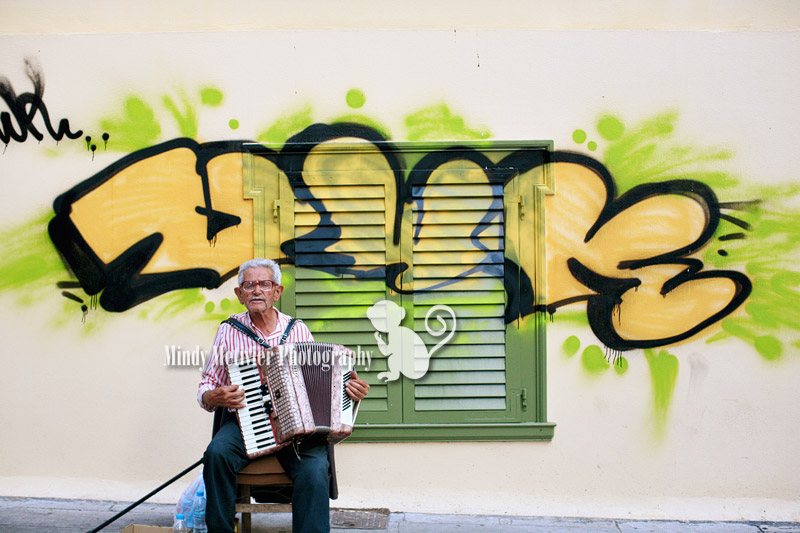 The famous caryatids on the Erechtheion atop the Acropolis. 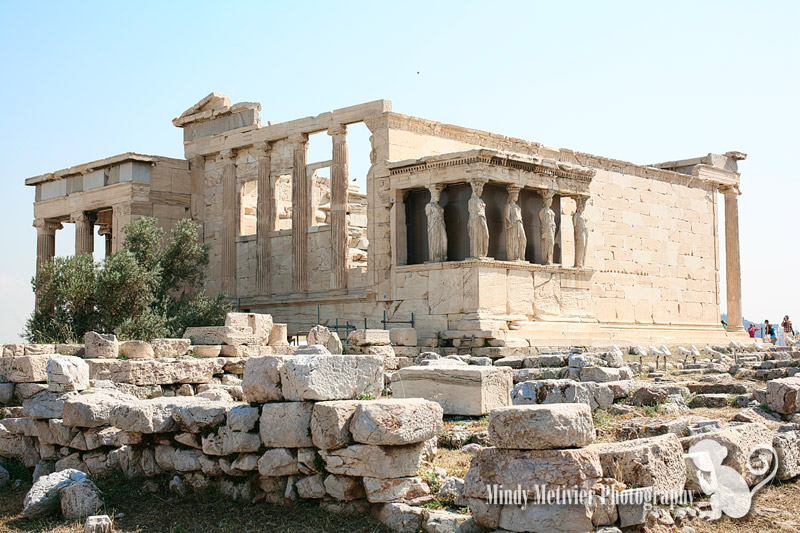 Me and the famous Parthenon atop the Acropolis.  Thank goodness you can’t see all of my sweat in the image…haha!!!  You can tell I’m sweaty because my bangs are plastered to my huge forehead!!!  Haha!!!

Love photographing flags wherever I go around the world…:)

During the restoration pieces of the Parthenon are taken apart, numbered, restored and put back together.  What a crazy and time-consuming process!!!  As a tourist and someone who appreciates ancient ruins, I’m grateful for their hard work and dedication.

The Temple of Zeus

A view of the Acropolis from the down below…and yes you have to hike up to the Acropolis.  There are no cable cars, lifts or other kinds of transportation that can take you to the top.  It’s all walking baby…and in the hot, hot, hot sun too!!!

Walking around these streets of Plaka.

Worry beads…these beads are used like Asian Stress Balls.  They are used in Greek and Cyprus culture to relieve stress and pass time.  Walking around Greece you will see men carrying these and playing with them.  If I was still teaching, I would have bought some for my kids to use in the classroom to help them focus…you know how some kids just need to touch something or play with something in their hands and then they can focus on the speaker, etc.